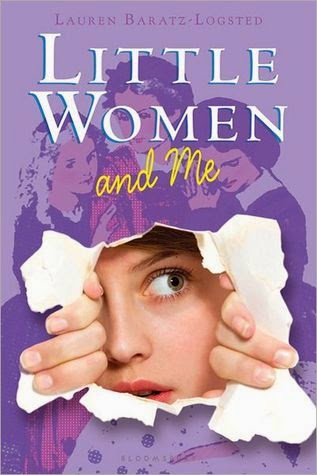 For all those who have read Little Women by Louisa May Alcott and find the story captivating and the characters lovable, you will appreciate Lauren Baratz-Logsted's efforts in rewriting the well-known story with a very modern twist to it in her novel Little Women and Me.  Logsted's main character, Emily March, is given an English assignment to chronicle what she would change in her favorite book. In rising to the challenge, Emily March is transported into the book, and becomes the middle sister of the infamous March sisters.

The first surprise in the book Little Women and Me, is that in a typical story of transporting back in time, the character is usually a bystander on the scene - the new kid on the block, if you will. However, Logsted chose for her main character to be added as a sibling to the March family, thus becoming the middle child. If that wasn't bold enough, then consider adding the character to an already existing story to continue on as if 'life as usual'. There was no expression of shock or surprise when Emily suddenly 'showed up' in the story, but instead she was accepted as if she is always expected to be there. We thought that this was a very ingenious way of continuing on Alcott's story of Little Women without shaking its foundation too much while actually changing parts of the original plot. Of course the dynamics and the storyline of the original fiction would have to make way here for the new, and we thought it was a good way of setting the stage and building the scene to carry out Emily's assignment - which is to look for areas in which she would change the plot. Emily was doing so without realizing it!

The first two chapters of the book set the pace and unfold the basic story plot change Emily had in mind for her assignment. Reading further into the book, readers will actually want to see how much Emily will accomplish her goal, and may be dissapointed if they were expecting more of the March sisters to play a greater part. But one has to remember that this plot (Little Women and Me) is written from a different viewpoint. Alcott's world with classic mannerisms and speech of 1860's New England is primarily lost in the narrative and perspective of Emily March; and understandably so because the story is being told by a teenager of the 21st century. Therefore, there is the typical whining and moaning about mondane life and boredom by a teenager who is far removed from all modern day technology and way of life. It's expected, and fans of Alcott may struggle with this.

Interesting read as we see Alcott's heroines from a different perspective. If you had a chance to change the plot, scene, the characters, or the outcome of your favorite book, what changes would you make?

Keep reading and follow along with us on our blog for updates in our journal entry on Little Women and Me!
Posted by Unknown at 2:07 PM