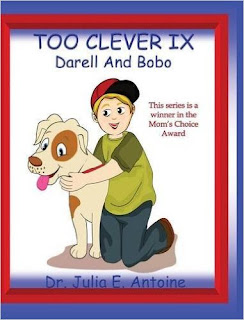 Darell and Bobo is the 9th installation of the Too-Clever series, which is written by Dr. Julia E. Antione. The series is a winner in The Mom Choice Awards.

Do you remember when you were twelve going on thirteen; how excited you were that you'd embark on the momentous journey of adolescence? It seemed as if twelve was the magic number when everything suddenly shifted into perspective: attitudes change, responsibilities taken more seriously, hormones rage, and the list goes on. Well, we all awoke soon enough to realize that things did change, but for the most part life suddenly got more complicated.

Eleven year old Darell Ruben is looking forward to turning twelve, and like boys his age, he is excited to finally leave childhood behind and walk the plank of 'teenagedom'. Life is about to get a little more interesting and adventurous, or so he's told by the adults around him; but for Darell he is more intrigued to see if the story about body hairs and raging hormones is true!

Darell and Bobo's author Julia E. Antoine, cleverly addresses issues of emotional and biological change in boys as they approach adolescence. Although the story is centered on what will happen once Darell turns twelve, it also pinpoints sensitive subject matters such as the importance of parents talking with their kids about the kind of changes to expect. The book also addresses some emotional setbacks boys can face when a responsible father figure is not in the home, as in the case of Darell's friend Jonas. In covering these issues, Antoine's storyline developed around the key character's problem while weaving in a clever sub-plot and secondary character.

When Darell finally turns twelve, he suddenly learns that there are some decisions he will have to make on his own; like choosing between friendships and relationships. Antoine's insightful inclusion of a girl between friends shows also that pre-adolescent change is not only biological and emotional, but that it also affects social dynamics. A sudden interest in the opposite sex may have taken Darell by surprise, but Antoine shows the reader that this too is a normal part of the 'big' change.

Too-Clever IX: Darell and Bobo by Dr. Julia E. Antoine is an insightful read, dotted with instances of humor despite the sensitive issues addressed in the book. On his twelfth birthday, did Darell finally get the body hairs he was long awaiting? We won't tell; you'll have to read the book to find out!
Posted by Unknown at 6:07 AM