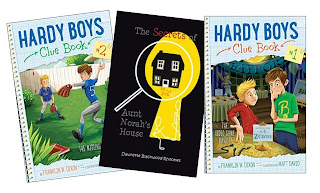 Aladdin Publishers is getting ready to release the new Hardy Boys clue book series, authored by Franklin W. Dixon and illustrated by Matt Dixon! The first two, The Video Game Bandit and The Missing Playbook will be released on April 19, 2016, and two more are scheduled to be released later within the year.
For those of us who grew up on The Hardy Boys mystery series, we are happy to see a new look introduced to appeal to the younger generation. This new series is more interactive – space is included in each installment for “readers to jot down their own ideas and solutions to the case!” The books are for age range 6 to 9 years – grades 1 to 4.


Everyone loves a good mystery, even kids, and that’s why we are throwing in a third mystery book – The Secrets of Aunt Norah’s House by Dawnette Blackwood-Rhoomes; all three for a low price of $19.99! See our offer at this link – Kids’ Mystery Clue Book Sale!


“Frank and Joe are on a mission to track down a thief in the first book in an all-new, interactive Hardy Boys chapter book mystery series.


Bayport Elementary is throwing a fundraiser so they can go on an end-of-the-year trip. Ellie Freeman’s parents have volunteered their house for the event, and neighbors have donated all sorts of prizes to be raffled off including movie tickets and gift certificates to Fun World. But the best prize of all is a brand-new ZCross50000, a video game system that every kid has been drooling over.

But sometime during the event, the ZCross goes missing. Can Frank and Jo figure out who took the prize before it’s too late to save the big school trip?”


“Frank and Joe try to hit a home run by figuring out what happened to the Bayport Bandits’ playbook before the first big baseball game in the second book in an all-new, interactive Hardy Boys chapter book mystery series. Includes space for readers to jot down their own ideas and solutions to the case!

Frank and Joe and the rest of their Bayport Bandits teammates can’t wait for Little League to start! Everyone is celebrating the beginning of the season at Speedy Zermino’s house. While they’re all together, Coach Quinn shows off the Bandit’s new playbook that contains all of the new strategies and plays that will help them to a winning season.

The next day at practice, Coach Quinn realizes the all-important playbook has gone missing! With their teammates counting on them to get the book back, Frank and Joe must take a swing at cracking this case…or their season will be over before it even begins.”


The Secrets of Aunt Norah’s House


“An almost 200 year house plus a book of clues equals mystery! What would you do if someone left you a book of clues, an old house with its secrets, and a letter which leads to a treasure hunt? Go sleuthing of course!


With seven bedrooms, a den, a dark spooky basement, and a creaky old attic to look for a treasure, who knows what secrets this old house has tucked away in its many hiding places! Ten year old Ossie and eight year old Cody are in for an adventure! Their mystery begins with a mischievous cat covered in flour and ends with the treasure of a lifetime!”