This is a guest blog post made by Don and Cathy Rush, authors of Robby's Quest, a children's storybook series. 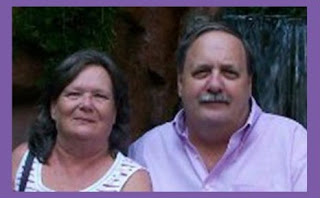 and I often fed the birds in our backyard. We loved watching the birds sitting together on the block wall while waiting their turns at the birdfeeder. When larger doves were too big to land on the birdfeeder, the smaller birds would kick seed to the ground for the larger birds to eat. It was very amusing. This gave us the idea to write a story about the birds. We wondered what the birds were thinking during their travels and adventures.

Robby’s Quest for Seed begins in , my birthplace. In all our books, we write about actual places we have either visited or lived. We chose Robby to be the leader of the flock. The birds have a system and a hierarchy. Ricky is Robby’s younger brother who secretly desires to be a leader. Then there is Benny the Blackbird. All the birds respect Benny. He seems a little mean to the other birds but he actually has a big heart. Benny’s job is to trail the flock and watch for strays. Then we have the Mourning Doves - Sal, Sid and Sky. The Sparrow family also travels with Robby’s flock. Jon and Jill are the parents and their children are Jiff, Jeff, Jan, and Joy. There are twelve birds altogether. Our first book serves to introduce the reader to the characters.

Don and Cathy both 61 years old; and they met and got married in Phoenix, Arizona where Don was a Manufacturing Manager at AlliedSignal Aerospace and was a Pharmacy Tech. They have two daughters, Rebecca and Tiffany and live with their cats Nomi and Hershey in Sun City, Arizona.

Being involved in their community, Don also served as a Governing Board member of the Cartwright School District in Phoenix, Arizona from January 1991 to September 1994.
Due to stress and several health issues, he left AlliedSignal Aerospace and they relocated in Minnesota in 1998, where Don became Production Manager then Plant Manager until medically retiring in May of 2009; after which they moved back to Phoenix to be closer to family and friends.
Posted by Unknown at 11:59 AM